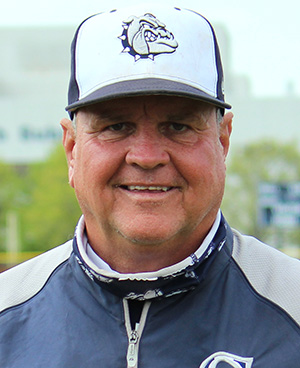 Coach Steve Ruzich was an All-American catcher at the College of St. Francis. He graduated in 1985 and was drafted that summer by the Chicago White Sox. Steve had a short stint as a pro catcher before coming to South Suburban College as head baseball coach in 1987.

Steve Ruzich enters his 36th season 1228 wins and 721 loses. Included in his tenure have been four sectional titles, thirteen regional titles and two appearances at the JUCO World Series including a sixth place finish and eight regional runner-up finishes. In 2005, under the guidance of Coach Ruzich, the Bulldogs set a school record for most wins and winning percentage in a season going 51-11 (.823).

On May 23, 2014, Coach Ruzich will officially be inducted into the NJCAA Baseball Coaches Hall of Fame in an opening ceremony for the 2014 World Series in Grand Junction, Colorado–annual home of the NJCAA Division I World Series–where Ruzich’s Bulldogs have made two past appearances. This recognition is a rare accomplishment–the NJCAA Hall of Fame began in 1982 and the Selection Committee has only chosen 89 members since that time.

Being a youth instructor, Head Catching Instructor at Midwest Sports Complex and Academy Director at GrandSlam have kept him busy. Coach Ruzich is particularly known as the Director and Coordinator of parent-child baseball camps locally, which over 1200 participants have attended. Steve also works part time for the Chicago White Sox, instructing in their fundamentals area at home games at U. S. Cellular Field.

Marty is in his third season as a Bulldog assistant coach, previously the Head Baseball Coach at Olive-Harvey College. Marty played his collegiate ball at Moraine Valley Community College.

In 2006, he participated in the Little League World Series as a part of Lemont Little League. This summer he will be returning for his 3rd year as Defensive Coordinator for the Gary SouthShore Railcats.

Marty is from New Lenox, IL.

Coach Lee Fischer enters his sixth season as an assistant coach. Fischer is a former Bulldog shortstop who played on the 2006 team that went 51-12, won 35 games in a row and advanced to the NJCAA Juco World Series. Lee was a first time all American and was named the best defensive player in the nation.

Lee went to the University of Missouri and played two years for the Tigers. After Missouri, Lee signed with the Chicago White Sox and played in their minor league system.

Lee will be the infield coach and works with the hitters.