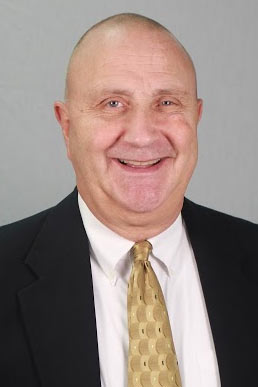 Coach Pigatti just completed his 16th season as head coach of the Bulldogs and has accumulated a tremendous career coaching record of 463-85 (.835). His 2021-22 team won the National Championship while being undefeated (33-0). They are the only team in history to be undefeated and win a national championship on the NJCAA Division II level. Pigatti was named the National Association of Basketball Coaches 2-Year National College Coach-of-the-Year.

Pigatti’s record in the post season is 64-17. 12 of his 16 teams have qualified for the NJCAA Division II National Championship Tournament. He has had three straight National Players-of-the-Year: Damarco Minor (’22), Deshawndre Washington (’21), Courtney Carter (’20). No other college basketball coach has accomplished that feat. He has had two other National Players-of-the-Year: Jovan Mooring (2016), and Michael Harris (2013). 36 of Coach Pigatti’s players were selected All Region IV Players, and 12 Region IV Players of the Year. He has had 13 First Team All-Americans and 16 total All Americans during his 16 seasons at SSC.

Coach Pigatti has set numerous records as a head coach. He is the only coach in college basketball history: NCAA, NAIA, and NJCAA; that has had nine 1st Team All-Americans in his first 11 years as a head coach. He has won 12 Region IV Championships. His teams have been ranked #1 in the country on numerous occasions. For the first time in SSC’s history, they appeared in three straight NJCAA Division II National Championships: 2007-’09, 2011-2014 and 2016-2018, 2020-’22. He has had eight teams finish with 30+ wins in his 16 years as a head coach, also the first time that was been done at SSC. His teams have been ranked in the top ten every season since he has been at South Suburban College.

Coach also knows how to win on his home court, too. He has complied at 251-15 (.943) home record during his 16 seasons at South Suburban College, seven of his teams have gone undefeated at home during the season.

Coach Pigatti came to SSC from St. Francis University in Loretto, PA where he was the head assistant men’s basketball coach and recruiting coordinator. At St. Francis, Pigatti was an integral part of signing the number one recruiting class in the Northeast Conference. In addition, the 2004-05 season record was the schools’ best in 8 years. During the 2003-04 season, Pigatti helped Kent State to a 22-9 final record, a Mid-American Conference (MAC) Eastern Division championship and a berth in the National Invitational Tournament (NIT).

During Pigatti’s tenure as an assistant at Akron, the Zips captured the most MAC wins for any team in the league from 1997-01, including a MAC Eastern Division title in 1998. He helped recruit two Mr. Basketball award winners, and Jimmal Ball, who was voted one of the top 15 freshman players in the country by USA today and ESPN. At Creighton University, he helped lead the Blue Jays to back to back 20-win seasons. Creighton also won the MVC title and advanced to the second round of the NCAA tourney. He also has been the head coach of the Five Star Basketball Camp, where he instructed several top 100 high school players in the country who now play in the NBA. He has instructed at many basketball camps and clinics around the country and abroad.

Pigatti and his wife, Kimberly, have a daughter Ashley Jo, and a son, Andrew John.

Member of the National Association Of Basketball Coaches