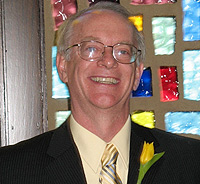 SOUTH HOLLAND, IL – When the Aleut Community of St. Paul Island Tribal Government wanted to document their tribe’s history, they turned to SSC professor Bruce Allardice. As part of the Tribal Government’s efforts to reclaim their heritage, the tribe set out to document the history of the baseball field on which tribal members had played baseball since (they thought) the early 1900s. Dylan Conduzzi, Aleut Community of St. Paul Tribal Government employee, contacted Professor Allardice, who conducts research on early baseball history for the Society of American Baseball Research and for Major League Baseball.

Prof. Allardice discovered articles in a little-known Connecticut newspaper which proved that Americans who used St. Paul Island had formed a baseball team from among the island natives in June of 1868—far earlier than anyone in the Aleut community had ever known! This is the first known instance of baseball playing in the state of Alaska, which had only become part of the U.S. the year prior. Prof. Allardice also tracked down the biographies of the team’s organizers.