Communication Professor John Geraci and other SSC staff welcomed high school students and their families to the event. “This year’s event was bittersweet for me,” said Geraci. “I’ll be retiring in May and I’ve been involved with this competition since it began. I’ve really enjoyed it. Over the years, a few students that have participated in this event have enrolled in my production classes. I hope they continue to choose SSC for their college education.”

In addition to the student awards, high schools competed for the Regional Award of Distinction, which is determined by the highest average score per entry. Ivan Aragon, a senior at Richards High School, accepted this award on behalf of his school. His goal is to study cinematography and movie directing in college. Aragon credits his teacher, Brian Wujcik, for their overall success. “He is an amazing instructor. He did a really good job preparing us for the competition this year. This is the first time Richards has won this award, and I’m excited that our hard work paid off.”

The student awards for each category are as follows: 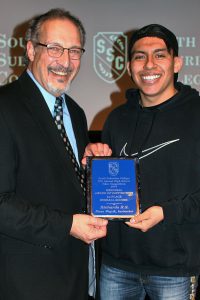