A sophomore guard, Lewis averaged 26.6 points, 3.5 assists, 4.6 rebounds and 3.2 steals this season for the Bulldogs. He represents the 10th First Team All-American under Head Coach John Pigatti in his 13 seasons at South Suburban. Lewis led the Bulldogs to the District III Championship Game and a 28-4 record this season. He was previously named to the All-Tournament Team and District III Player-of-the-Year.

“Being recognized as All-American is a great honor,” said Lewis. “A lot of credit goes to my coaches and teammates—we stayed together through a lot of changes and really had a great season.”

Lewis, a graduate of Chesterton High School in Indiana, came to SSC in 2019 after one year at Iowa Western.

“Coach Pigatti toughened me up, made me take responsibility and become more mature, and South Suburban College provided the tools and academic support to be successful,” said Lewis. “This entire experience taught me how to overcome adversity.”

The All-Star game will be played on Saturday, May 18th at 4:30 p.m. CT in the Orleans Arena. The game will feature the best players in the country from NJCAA Division I, II, and III schools.

“I am very happy for Rhyss,” said Coach Pigatti. “He has been through a lot and worked very hard this season to get to this point. Being named 1st Team All-American and to the NJCAA National All-Star Game is very special. Rhyss has a very bright future in this game. We were very lucky to have a person of his quality representing the school.” 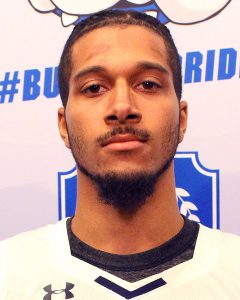