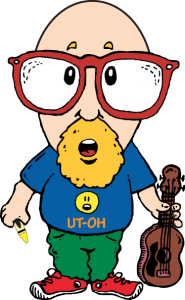 SOUTH HOLLAND – Multi-award winner Dave Rudolf will appear in four performances at the Kindig Performing Art Center of South Suburban College. Dave. His fun-filled interactive shows will take place on April 6 and 7, 2017 at 9:45am and 11:30am.

“The Wacky World of Dave Rudolf” will feature goofy and interactive songs for kids of all ages. Children in the audience will get a chance to get on stage with Dave to sing, dance, limbo and conga their way to a delightful experience they will remember for years to come. Parent and grandparents will enjoy the show, too.

Dave Rudolf’s comical and accessible musical style has made him a popular performer for college campuses across the country. In addition to being a Gold Record recipient, Rudolf has been nominated for a Grammy award, has received the Parents Choice Award and has been nominated 15 times for College Entertainer of the Year. Don’t miss your opportunity to see one of the most highly regarded entertainers!

South Suburban College is located at 15800 State Street in South Holland, Illinois, between Sibley Boulevard and 159th Street. The campus is convenient to Routes 94, 80, 57, and 294 and is also accessible by Metra. Free, ample, well-lit parking is available. Reservations are suggested.

Tickets are $5 per person. For more information or to reserve tickets, call the 24/7 box office voicemail line at 708-210-5741. Leave your name and phone number and someone will return your call. You may also reserve tickets by e-mail at boxoffice@ssc.edu.