SOUTH HOLLAND, IL–The Executive Director of the Illinois Community College Trustees Association (ICCTA) Mike Monaghan made a special trip to the June Regular Meeting of the Board of Trustees of South Suburban College to acknowledge and present the ICCTA Service Award to both Vice-Chair John Daly and Trustee DeFilippo.

“The ICCTA would like to recognize and congratulate Trustees John Daly and Tony DeFilippo on their dedicated service to the Board of South Suburban College, Community College District 510, and the Illinois Community College System,” said Monaghan at the open meeting.

Daly, an Oak Forest resident, has served as a member of the SSC Board of Trustees since 1991. He became Vice-Chairman in 1994 and served as Chairman of the Presidential Search Committees. As Vice-Chair of the Board, Daly leads SSC’s ongoing efforts to improve services while maintaining a stable or reduced tax rate. DeFilippo, a Calumet City resident, works as a registered pharmacist and is responsible for the advancement of medical education and clinical trial opportunities at academic and medical centers. He serves in this capacity throughout the country. On the board level, DeFilippo serves as the SSC’s Finance Chair, a role he has filled for nearly his entire tenure while the college has collected 24 consecutive COE awards for excellence in financial reporting from the Association of School Business Officials (ASBO).

Not to be outdone, the SSC Board of Trustees surprised Monaghan with an award of their own in advance of his June 30th retirement when they presented him with an Honorary Associate of Arts Degree from SSC.

“On behalf of South Suburban College and our Board of Trustees, I would like to thank Mr. Monaghan for all of the visits he has made to our campus, for all of the support he has provided to SSC and the ICCTA for the past 15 years,” said Chairman Zuccarelli. “It is our honor and privilege to bestow this rare Honorary Degree to you as we wish you the very best in your retirement.”

Michael S. Monaghan became the Illinois Community College Trustees Association’s fifth executive director on January 1, 2005. As the leader of one of the nation’s premier trustee associations, Monaghan brought 40 years of experience in higher education and the legislative arena while advocating on behalf of lllinois community colleges. He previously served as ICCTA’s director of government relations from 1989 to 2004, where he developed a statewide advocacy program and organized annual Lobby Days in Springfield and Washington, D.C. He also received the Illinois Society of Association Executives’ 1998 Government Relations Award for his successful efforts to establish a state health insurance program for community college retirees. Most recently, the ICCTA renamed its Meritorious Service Award in his honor.

Monaghan added, “I am honored and humbled to receive this honorary degree. Furthermore, I am grateful for the opportunities I have had to work with this Board and college regarding State issues. Truly, South Suburban College is a friend and stellar partner to the Illinois Community College System.”

Established in 1927, South Suburban College is a fully accredited, comprehensive community college with an annual student population of more than 10,000. Located in South Holland, Illinois, SSC offers over 100 educational and career pathways through associate degree, certificate and transfer programs. 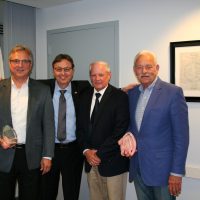 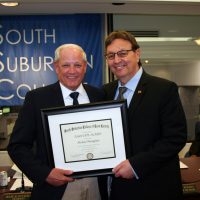