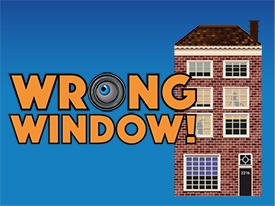 SOUTH HOLLAND – The PAC Rats Theatre Company of South Suburban College will present the comedy whodunit, “Wrong Window.” Performances will take place in the Kindig Performing Arts Center on the main campus on September 15 and 22, 2017 at 7:30pm and September 16, 23 and 24, 2017 at 2:00pm.

Loosely based on Alfred Hitchcock’s iconic movie, “Rear Window,” the play centers around estranged couple Jeff (Charlie Furtek of Lansing) and Marnie Elbies (Jennifer Crick of Homewood), who are getting back together after a brief separation.

Like the main characters in the Hitchcock’s movie, the Elbies enjoy spying on the neighbors who live in the apartment across the way. But that innocent fun quickly turns into pure chaos when the Elbies and their good friends, Robbie (Martell Jefferson of South Holland) and Midge Smith (Ashley Orendorff of Thornton), hear the neighbors, Lila (Heather Young of Chicago) and Thor Larswald (Robert Smagacz of Calumet City), fight and then see what they think is a murder.

Once Lila goes missing, the Elbies and Smiths play amateur sleuths and become involved in hilarious shenanigans to try to find out what really happened. Marnie and Midge swipe the master keys off of Loomis (Kevin Hathaway of Park Forest), the building’s handyman, while Jeff and Robbie are near suspects to the sharp-eyed Detective Doyle (Catherine Hundt of Thornton).

Just when you think you’ve guessed who did what, the show takes a completely different turn. With mistaken identities, extramarital affairs and a corpse popping up, two questions remain: Who killed Lila Larswald? And if she’s not dead then who is?

“Wrong Window” is directed by Homewood resident Pat Nevins. Set design is by Dean Scalzitti of Hegewisch. The costume designers are Joanna Tassin of Park Forest and Angela Martin of Midlothian. Sandra Wagner of Lansing is the stage manager. Jordan Swierczyna of Robbins is both the lighting and sound designer.

Tickets are just $8 for adults, $6 for seniors 55 or better, $6 for students. South Suburban College staff and students will enjoy a buy one, get one offer with an I.D. Call the 24/7 box office voicemail line at 708-210-5741. You may also reserve tickets by e-mail at boxoffice@ssc.edu. Group rates are also available. 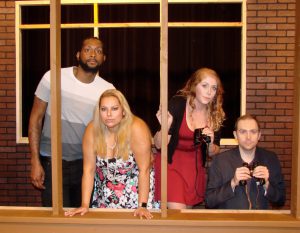