SOUTH HOLLAND – The Children’s Theatre Company of South Suburban College is producing the classic adventure tale The Adventures of Robin Hood, by Michele L. Vacca. The upcoming performances will take place on Saturdays, January 12th and 19th at 11:00 a.m. and 2:00 p.m. Additional performances are January 15th through 18th at 9:45 a.m. and 11:30 a.m. Seating for weekday performances is limited and advance reservations are required.

The Adventures of Robin Hood is a delightful, fast moving and witty play suitable for a wide range of ages. Robin Hood (Juniper Boerman DeYoung of Thornton) and his Merry Band encounter the nasty and nefarious Sheriff of Nottingham (Malcolm Banks of Riverdale) who is about to collect taxes (again!). They immediately don disguises and the fun begins.

While the Sheriff and his hapless assistant Oswald (Jamel Williams of Chicago Heights) search aimlessly in the forest, Robin encounters a disguised Lady Marian (Taylor Michael of Lansing) and challenges her. She easily wins her right of way and Robin invites her to join him and his Band. In an effort to capture them, the Sheriff entices Robin and the Merry Band with an archery contest. When that doesn’t work, the sly Sheriff kidnaps Maid Marian. Robin vows pursuit.

The members of Robin’s Merry Band are Jonathon Gralewski of Lansing as Little John, Paul Braun of Highland, IN, as Will Scarlett, Pat Nevins of Homewood as Friar Tuck. Also included in the cast are Sandy Wagner of Lansing as Nell the Innkeeper, Betty Neil of Markham as Midge the Miller.

The Adventures of Robin Hood is directed by Ellie Shunko of Lansing; the stage manager is June Wagner of Chicago Heights; costumes are by Joanna Tassin of Park Forest; lighting is Lydia and Dominic Bellamy-Palma of Park Forest; fight choreography is by William Boerman-Cornell of South Holland, and the scenic artist is designed by Kyley Hobgood of Calumet City. Jordan Swierczyna of Robbins is the production assistant.

Tickets are only $5 and large group discounts are also available. Call (708) 210-5741 to make reservations. For additional information, email boxoffice@ssc.edu or visit the theatre website at http://learn.ssc.edu/theatre/.

South Suburban College is located at 15800 S. State Street in South Holland, Illinois, between Sibley Boulevard and 159th Street. The campus is convenient to Routes 94, 80, 57, and 294 and is also accessible by Metra. Free, ample, well-lit parking is available. 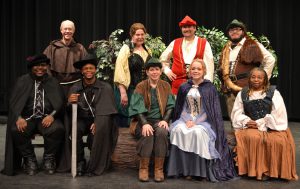